E-Waste in Australia: A Big Problem That Calls for an Even Bigger Solution

It’s not a secret that the whole world continues to generate far too much waste. This issue has been around for what appears to be several decades now. But during the past few years, we are seeing one major concern popping up, and it’s more specific.

What’s the Problem with E-Waste?

It’s a number’s game – a truly massive one. Humans all over the globe produced more than 44.7 Megatonnes (documented) of e-waste around 2017. It may not seem like anything huge but imagine 125,000 jumbo jets flying in the sky on their way to landfills every year. It’s not a good thing. Also, it is believed more than 80% of e-waste remains undocumented.

The problem here is one that we all know and recognise: technology. People have become accustomed to and dependent on technology, especially smartphones, tablets, earphones, GPS trackers, and smartwatches. They have become a part of our daily lives because of their numerous benefits and uses. They make our lives better and easier as they become more advanced.

Unfortunately, as technology improves, the lives of our gadgets keep getting shorter. Some die or begin malfunctioning, while others are simply discarded because users want a new one. Once a more sophisticated version is introduced, we want to get a hold of it. We’re all guilty of this. And manufacturers, as we have known, do not intend for their devices to have a long lifespan. Instead, they aim to build gadgets that will eventually become outdated.

With the fast-growing number of devices, especially unwanted ones, the volume of e-waste sent to landfills is appalling. It keeps on skyrocketing, creating a ticking time bomb that will soon go off, devastating the environment. But that is if we do not do something about it. 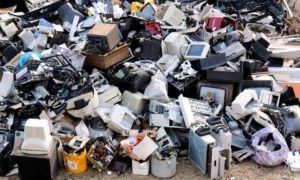 On top of that, Australians are said to purchase more than four million computers and 3 million TVs every year. It’s believed that there will be 181 tonnes (44 million units) of televisions and computers will reach the end of life by 2027 to 2028. Most of these products will go straight to landfill.

And let us not forget that electronics are not entirely safe, especially with regards to the environment. Many types of e-waste contain hazardous materials. For example, a cathode ray tube (CRT) TVs were once so popular. Still, these older TVs are now piling up in various landfills all over the country. CRTs have over two kilograms of lead, making them the most significant source of lead that goes to waste.

The newer TVs that we have today, particularly flat-screen televisions, do not have as much lead as CRTs, fortunately. However, these more recent products have more mercury, which is not a safe material at all.

Apart from TVs and computers, Australians are lovers of technology, owning almost every little device that you can imagine:

Australians may be aware of e-waste and its effects on their surroundings. However, most people do not know how to handle the situation, particularly in e-waste disposal.

How Australia is Trying to Handle E-Waste

Australia has actively tried to mend the e-waste issue in the country. Over the years, State and Territory Governments have partnered with the Australian Government to create certain rules and laws. That way, the citizens will find it easier to dispose of their e-waste properly.

The local and federal governments created the National Product Stewardship Scheme (NTCRS). This scheme is funded by the computer and TV industries. It is based on other recycling efforts that organisations, councils, and charitable institutions have put up in the past. They continue to exist today and have become the inspiration for NTCRS.

The NTCRS collects unwanted products from homes, offices, warehouses, or anywhere else. Staff will come over and pick up the items without additional charges. The first-ever state to implement NTCRS was the ACT. Later on, other states followed suit, including Western Australia, Victoria, and Queensland. Drop-off points for recycling are now available.

Other types of e-waste may not be allowed under the NTCRS. For this reason, Australia tries to find ways to reduce and recycle e-waste, ultimately stopping it from reaching landfill.

Some of the waste management schemes placed across the country are:

Did you know that you should not just throw your old and malfunctioning electronics into the bin? Instead of sending the item to the landfill, there is a better method. You should send it to a qualified metal scrapyard that accepts e-waste. Collins Recycling is your best option today. We have worked with several TVs, computers, and other devices for years. That’s why we know how to pick them apart properly to gain precious metals.

TVs and other technological devices contain gold, steel, zinc, brass, and aluminium, which are all types of non-renewable resources. According to a website, just one tonne of electronic scrap that can be gained from a personal computer can already have 17 tonnes of gold ore. That is a lot of reusable and recyclable resources, which can be beneficial for the country. E-Waste Components and Other Facts

However, one thing to note is these electronics also contain lead, mercury, and cadmium. It is why you should not attempt to get the valuables on your own. Collins Recycling is where your e-waste should be and not the landfill. Think about how much gold you can help save and reuse when you send your old electronics to our facility.

But how are electronic parts pulled apart? What about those that contain mercury? To understand the process, it helps to know the components in old and unusable electronics.

E-waste is undoubtedly complex. It holds a lot of things, including plastic, ceramic, ferrous, and non-ferrous materials. Electrical appliances and electronics have printed circuit boards or PCBs, which contain roughly:

The circuit boards are coated with tin, silver, copper, or any base metal for conduction.

E-waste processing is often complicated. You should not attempt to do it on your own, mainly because you may not be aware if there is mercury present. You also risk damaging all the components if you don’t know what you are doing.

There are three top reasons why e-waste processing has become more prevalent over the years:

E-waste comes in a variety of shapes and sizes – and chemistry. They usually have hazardous metals like mercury (Hg), lead (Pb), cadmium (Cd). Collins Recycling removes these components using a separate treatment and later processes them for recycling.

In the last decade, it is no longer allowed to dig a hole on the ground and dispose of e-waste down there. It’s also prohibited to burn it in incinerators unless the hazardous materials have been removed prior. Exporting e-waste to other countries used to be an accepted norm, but international regulations do not permit anyone to do so anymore.

By burning e-waste in the air, disposing of it underground, or using acid will cause environmental deterioration. Those activities will spoil the water humans and animals drink and release toxic gases into the air.

Metal recovery is one of the enormous benefits of e-waste processing. Both precious and base metals are a part of managing e-waste in the country. Through recycling, metal use can become more sustainable and therefore provide resource efficiency.

For example, PCBs and small electronics, such as calculators, have more than 80% value distribution of precious metals. And after gold and silver, copper has the next highest value during e-waste processing. If precious metals are not recovered successfully, along with base metals, it can hurt the process economy.

It is worth noting that hazardous metals should be appropriately isolated from e-waste to obtain sustainable resource management. Doing so also maximises the recovery of precious metals from old electronics.

All these steps are critical and should work together to recover precious metals and base metals to help the economy.

Let’s take a look at the steps in more detail:

Collecting e-waste is predominantly facilitated by the government in Australia. There are policies and agencies mentioned above that can take your e-waste from your home. You can also hire a skip bin but ensure that you have informed the business you will get rid of e-waste. Some companies do not accept electronic waste, especially anything with batteries, lead, and mercury.

You can also gather the old electronics you have and send them to Collins Recycling. We accept almost all end-of-life components, which we will sort at our facility. We pull apart the useable parts, which will then go back to the consumer supply chain.

In other words, copper, gold, and other materials will be reused in new mobile phones and other devices. It does not affect the performance of the gadgets. E-waste recycling is performed in many parts of the world, especially China, where they take e-waste from many countries – usually underdeveloped ones.

The next step is the pre-processing of e-waste. The expired equipment or electronics will be dismantled, usually by hand. Then, the individual components will be isolated and tested before disposing of the unusable items.

In the early stages of e-waste pre-processing, the liberation of wiring boards, housing, drives, and many other components is achieved. Once pulled apart successfully, they will enter the mechanical process where e-waste scrap will be shredded into pieces. Typically, hammer mills are used, but other processors can also work.

Metals and non-metals, at this point, are now separated. Professional techniques are applied, which is comparable to mineral dressing, such as eddy current separation, screening, and density separation methods. 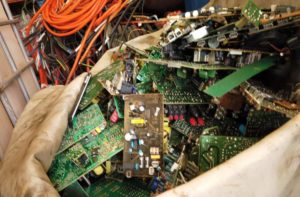 Finally, we approach the last stage, where fractions of non-metal and metal components are further processed. Non-metals usually consist of thermoset resins, glass fibres, and others that cannot be re-melted because of their complex chain structure.

On the other hand, metallic fractions are further processed, either by separating or extracting minor elements with the use of a variety of metallurgical processes. The exact process typically depends on the type of metal. For example, copper, lead, and zinc are processed using hydrometallurgical routes, extracting them from their primary ores.

Once all the needed components are gathered, it is time to dispose of the unwanted items. Of course, precious metals and recyclable metals are kept, helping with both resource and waste management. 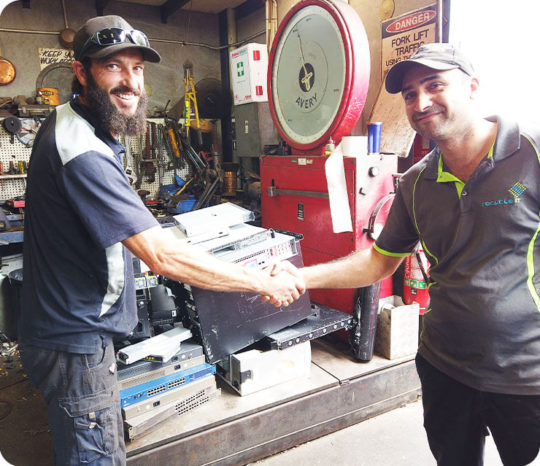 Don’t just throw your electronics into the bin, which will go directly to landfills. Take your e-waste to Collins Recycling, get paid, and we’ll take care of the rest of the process for you.