Copper Facts and Why It Should Be Recycled Copper is one of the many minerals that we know about. But did you know it is essential to our daily lives? Copper is highly valued for its ductility, meaning it can handle physical alterations without breaking. It’s malleable with thermal and electrical conductivity. Copper is corrosion-resistant, too. This element is also considered an important nutrient in our everyday diet. With antimicrobial properties, copper can aid in preventing infection. Because of these uses and benefits, copper is one of the most consumed minerals in the world, along with aluminium and iron.

Copper (Cu) is a nonferrous metal. Australia and about half of the world produce copper for electrical applications. But it’s also useful in building construction, consumer products, transportation equipment, and industrial machinery. Let’s break it all down:

Copper’s electrical conductivity is parallel to other metals (except silver), which is why it is used in:

It’s estimated that 65% of mined copper goes to electrical applications.

Copper was first utilised in ancient Egypt for water pipes. Interestingly, the ones obtained are still in good condition despite having been around since 2750 BC. About 25% of copper produced goes to buildings and other crucial construction elements, such as plumbing, cladding, and roofing. That’s because the metal is light, durable, and sturdy. It doesn’t require heavy maintenance requirements but can remain aesthetically pleasing for years.

Copper is one of the main elements used in trains, cars, and lorries. High purity wires carry electricity from the car battery to the rest of the vehicle to reach the lights, onboard computers, navigation systems, and central locking systems.

Copper is also used in making coins, musical instruments, cookware, and sculptures. This metal can even be found in jewellery, doorknobs and locks, and light fixtures. 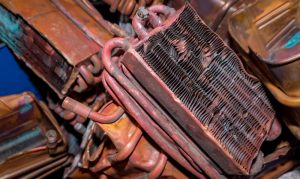 Why Copper Should Be Recycled

The demand for copper continues to grow. It’s not surprising that this daily demand will become increasingly difficult shortly. But there’s good news. Copper is extremely malleable. This flexibility allows it to be recycled infinitely without affecting its physical form and attributes. Recycling copper, without a doubt, can help meet the growing demand for this metal. It’s believed that 34% of copper produced across the world comes from recycling.

But the question is: Why should you care about recycling copper? Will it benefit you? Copper recycling is nothing new, but many Australians don’t know about it. Instead, they simply dump their electronics in dumpsites or landfills. Others keep old electronic devices in their home because they do not know what to do with them.

Recycling metals, such as copper, offers economic and environmental benefits, including the following:

Copper refinement is toxic to the environment. Without a doubt, recycling copper is a relatively safer option that can help minimise toxins and gases released into our surroundings. Additionally, it’s vital to the local economy. It creates jobs in the recycling sector, which can involve several tasks, from collecting copper scrap to the recycling process itself. How to Recycle Scrap Copper Wires

The reality is that recycling copper is not something we do as private individuals. It’s usually a task performed by responsible plumbing and car companies. But it does not mean that you do not have a part to play in ensuring copper gets appropriately recycled.

That’s why it is significant to check whether your electrical and electronic products go to the correct collection points. This step is not only for recycling copper but also for recovering other precious metals like gold and silver. This crucial process also segregates rare earth metals so they can be recycled and reused as components in new electronic products.

Copper and copper alloy, if not recycled, will go to openings in the ground or landfill. With the growing population comes increased waste, which means there’s a need for more holes. But landfills are being filled up more rapidly than ever. They have become scarcer, making it more expensive to dispose of any waste, including copper.

Copper is one of the many scrap metals that Collins Recycling deals with regularly. If you have any copper wires and electronic products with this metal, we can buy them from you. You not only get rid of unwanted items but you also get paid for doing so. Contact us today to schedule a pick-up at your desired location.

The Importance of Scrap Metal Recycling
22/11/21