Note: If you’re recycling your air conditioner with us, they must be degassed by a licensed technician. They won’t be accepted with gas/refrigerant still inside.

Air conditioners are believed to be one of the essential appliances in Australian homes. In fact, more than 4.6 million households in the country use at least one aircon. But if you think that air conditioners last forever, you’ll be disappointed. A good quality AC can have a lifespan of up to 15 years. But if you bought a cheaper unit and failed to have it routinely serviced, it may die faster than expected.

The good news is that air conditioners are no longer that expensive. Some even have new technologies that can help make your home more comfortable, especially during the summer. Whether you need a replacement or an upgrade, the question is, how do you dispose of your old aircon? Is there a way to recycle the unit?

What You Need to Know About Air Conditioners

Aircon disposal is not as straightforward as many people may think. You’re not allowed to simply throw it in the bin and wait for the local collection service to get rid of it for you. Many people are unaware that it is illegal to leave the air conditioner no matter where in Australia.

Air conditioning units and dehumidifiers contain components that are not so friendly to the environment. The most known is a refrigerant. Certain refrigerants, specifically R22, are banned in the country. However, old aircon units can still be used. Those that were manufactured in the 90s generally come with this refrigerant. The Australian Government aims to have R22 entirely eliminated in households and commercial applications by 2030.

R22 is known to cause great damage to the ozone layer. It produces greenhouse gases, which do not contribute to the well-being of humans and animals.

Apart from refrigerants, aircon units also have foam blowing agents, which emit dangerous gases into the atmosphere. Although the Government has introduced efforts to stop the proliferation of these materials, they continue to be present in many appliances. That’s why air conditioners should be appropriately disposed of and recycled. 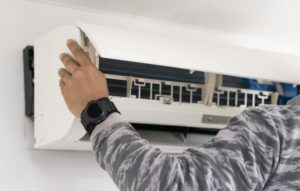 How to Safely and Correctly Recycle Air Conditioners

The Australian Department of Agriculture, Water, and the Environment estimates that about 550,000 air conditioners are disposed of each year. Along with that number are the unwanted refrigerators and dehumidifiers that households try to get rid of annually. All these appliances can pile up in landfills, even though they can be recycled and reused. To help with proper disposal and recycling, here are special guidelines to follow:

Disposal of air conditioners can generate tons and tons of ferrous and non-ferrous waste. AC units contain different types of plastics, such as PVC, polystyrene, ABS, and insulating polyurethane foams.

Plastics and other non-metallic outputs usually do not have a saleable value. Also, some components in the aircon unit may require specific treatments, such as:

Many Australians now understand the significance of recycling. Some air conditioning units are still in good condition, which means they can be sold or even donated.

However, not everything is qualified to be resold. You can take the appliance to scrap metal companies, such as Collins Recycling, to take care of your old aircon for you. Don’t hesitate to give us a call to know how we can help in disposing of your air conditioner. 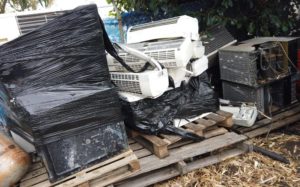 Regulations That Cover the Sale of Copper
02/06/22

Metals and Magnets: The Explanation behind the Magnetic Attraction
16/03/22

The Importance of Scrap Metal Recycling
22/11/21