Batteries from electronics like cell phones, laptops, digital cameras, and children’s toys now have long lifespans. However, once their electrical circuit is used up, the familiar yet incorrect practice is to throw them into the bin. Some household items should never be placed in the recycling bin, and your depleted batteries are among them.

Battery recycling is more important now than ever. Batteries come with toxic and corrosive elements, such as cadmium, lithium, lead, and mercury. These substances can be lethal to humans and highly hazardous to the environment. Improper disposal of batteries can contribute to air and water pollution. They usually end up in landfills where they leak and eventually decay. If you ask, “Where can I recycle batteries?” you will find the answer here.

Let’s talk about the different battery recycling processes, which goes beyond metal and magnets.

The most common type, also the easiest to recognise, is an alkaline battery. Every household has an alkaline battery (AAA, AA, C, or D), which powers children’s toys, remote controls, torches, and digital cameras. This battery is made from steel and a combination of carbon-zinc or zinc-magnesium.

To recycle your alkaline batteries, we recommend collecting and sending them to a recycling facility like Collins Recycling. Alkaline battery recycling typically begins by shredding the battery first. Then, an electric arc steel mill will separate zinc and metal. In other cases, the shredded battery will be melted in a furnace to make zinc extraction much more manageable. The extracted metals will then be recycled.

Rechargeable batteries easily dominate our world today. Smartphones, portable speakers, headphones, and many others now use lithium-ion (Li-ion) batteries. This battery type is mainly made up of lithium but also contains carbon. Li-ions should not be confused with lithium batteries, which are non-rechargeable types.

If you have lithium-ion batteries that have reached the end of their lives, you should do your part to recycle them. With the increasing popularity of electric vehicles that are powered by these batteries, it’s estimated that the world will most likely produce about 2,000,000,000 kg (two million metric tonnes) of used Li-ion batteries by 2030.

So, where can I recycle batteries in Perth? You can send them to a recycling facility so that their valuable contents will be reused and repurposed. Unlike alkaline batteries, the lithium-ion battery recycling process is not as straightforward. However, it is doable, thanks to some technological improvements.

An efficient method is to use high-temperature metal reclamation (HTMR). Lithium is a metal that will quickly melt and turn into liquid at 180.5 degrees Celsius, making recycling a bit challenging. Through HTMR, lithium is separated and will be collected afterwards when it has converted into a metal oxide.

Meanwhile, lithium batteries will usually be processed through hydrometallurgy, where a caustic or acidic solution is applied once the battery is cut open. This solution negates electrolytes, allowing ferrous and non-ferrous metals to be separated from one another. That way, carbon, lithium, and other useful substances can be collected for recycling. 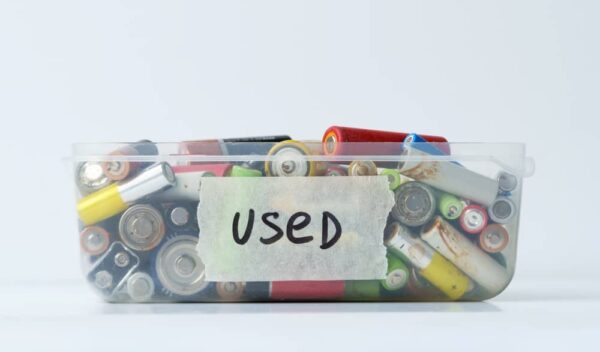 Before lithium-ion came into existence, the rechargeable battery scene was first conquered by nickel-cadmium (NiCad). This battery was omnipresent in laptops and power tools. Nickel-cadmium is made up of cadmium, nickel, plastic, and steel.

Nickel-cadmium battery recycling can be done with the HTMR method, much like lithium-ion. However, its nickel content makes the HTMR process ineffective unless it is first separated before sending the batteries to the furnace. That’s because nickel is a high-melt metal, requiring 1,445 degrees Celsius to melt. When it solidifies during casting, recyclers can separate nickel from cadmium, which melts at 321.1 C. And just like lithium, cadmium will be collected as a metal oxide.

Part of the benefit of recycling batteries is the creation of metal oxides. These materials are used for sensors and biosensors, as well as super- and semi-conductors. They are also utilised in making antifungal agents, ceramics, and some medicinal applications.

Recycling is not just about making the same objects over and over. It can also be useful for tertiary or chemical recycling, where items are broken down to be processed and returned to their raw state to produce a whole new product.

Lead-acid batteries are everywhere. You have them in your car or motorcycle. If you are in the industrial or construction industry, you have lead-acid batteries in forklifts and other heavy machinery. That’s why this battery type is known as the automotive battery. It can be in various forms, including the traditional lead-acid, absorbent glass mat, or gel type.

When it comes to lead-acid battery recycling, the battery first goes through a grinding process. The battery needs to be fully shattered, so it’s often sent to the hammer mill. The next step is to neutralise the acid content, which is sulphuric acid, by putting the hammered pieces in a vat. Separating lead and polymers is easy at this point because lead will sink, and the plastic will float.

As we all know, lead is one of the materials with the biggest threats to the environment. Therefore, leaving lead batteries in landfills is a huge no-no. But despite this knowledge, many people and businesses fail to adopt a safe way to dispose of lead-acid batteries.

With battery recycling, new products can be created. For example, plastics obtained from the lead-acid battery can be used to form new bins or even new lead-acid batteries. Meanwhile, the gathered lead will usually be melted. Once liquefied, it will be moulded and cleared of impurities. The ingots (nuggets) will be forwarded to different plants where they will be broken down and reused, usually to make new batteries again. 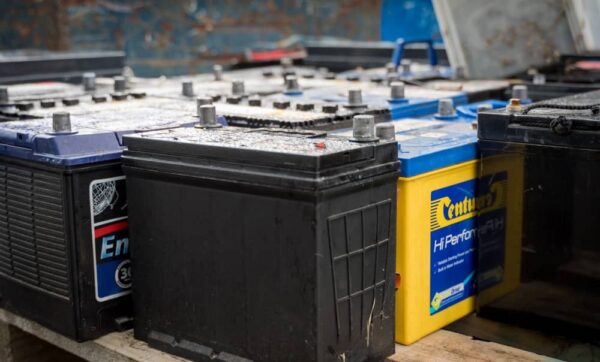 Where Can I Recycle Batteries?

You most likely have batteries in your workshop drawers or even sitting in your garage. Don’t let them take up space or, worse, be sent to the landfill. Gather your alkaline, lead-acid, lithium-ion, or nickel-cadmium batteries, and drop them off at Collins Recycling. For larger loads, let’s make it easy for you. Contact us and arrange a pick-up service. You not only get rid of old, unwanted batteries and help save the environment but you can also get paid to do so.

For more information, please don’t hesitate to call our friendly team on (08) 9457 3973 or fill out the form on our Contact page.